On the Value of Death

Yesterday I attended the launch of the The Lancet’s commission on ‘The Value of Death’ in Bristol. I was invited through my being involved with End-of-Life Doula UK and Living Well Dying Well, as well as my being an Elder Mediator. It was a fascinating day, with international speakers of such awewomely high-standing. Here are a few of my personal notes, captured (inaccurately for sure!) along the way, posted here informally to share some of my learning and experiences during a day amongst some of the best thinkers on death and dying.

The Lancet commission on ‘The Value of Death’ , Bristol 27 Oct 2018 – personal notes

The spiritual aspect of a ‘medicalised’ death:

·      Malcolm Johnson, Visiting Professor of Gerontology and End of Life Care, University of Bath, said, “The spiritual and religious dimensions of late life deserve more attention from researchers as well as health care practitioners. The inner lives of old people are just as important as maintaining their physical wellbeing.”

·      Atul Gawande observes in ‘Being Mortal’, The waning days of our lives have been given over to treatments that addle our brains and sap our bodies for a sliver’s change of benefit…. And what if there are better approaches, right in front of our eyes, waiting to be recognized.”

·      “Here are 3 or 4 or 5 health care technologies which are low cost, and NICE will pass them for use, but people will tell us they are not good value in terms of extending life meaningfully. Society will tell you we are spending too much on life extending technologies.” Prof Eric Finkelstein

·      In order for people to accept a less medicalization at end of life: “We need more decision aids, and neutral people who can present all the information for people.”

Interesting responses to my raising the notion of EOL Doulas:

Mr R Rajagopal, the Director of the WHO Collaborating Center at Trivandrum, Kerala,  responded by describing the army of community volunteers he has helped recruit and train to support others at End of Life. (http://hippocraticfilm.com)

At lunch, Tony Walter, Honorary Professor of Death Studies at the University of Bath questioned the value of doulas. “How long is the training?” he asked. I responded, “With Living Well Dying Well, it’s 20 days, and months of mentoring and ongoing supervision, and portfolios of written work.” I was keen to reassure him of the rigour of the training. “You see?” he exclaimed. “With all their training, doulas are just ‘another’ professional!”

I replied, “How on earth do you get permission to go anywhere near a dying ‘patient’ in this medicalised age, without training?!

He replied, “In Kerala, it’s two hours training. We need thousands of people to be enabled to go out into their communities and help their neighbours. Not as professionals, not as volunteers even!”

I agree, there would be value in a Dementia Friends type of training, but I was left feeling Professor Walter hadn’t yet investigated exactly what an End of Life Doula does…? I wish he would! He’s such an important voice in the field!

Later on in the conference, there was a  (controversial) theme raised about ‘whether’ patients can be ‘empowered’ to make decisions at the end of life, burdened as they are by anxiety etc. It was generally agreed that people needed to be given time for meaningful, informed conversations in order for them to understand the choices before them. Precisely, well-trained doulas can help people with those processes of thinking and decision-making. A two- hour community training is not the same as a full training to help a non-clinician understand the landscape the dying person may need to navigate along their care pathway. Doula’s don’t advise people, but they know the field of death and dying well enough to help accompany people along their journey.

Preparing for death, advance decisions and lasting power of attorney.

If you need to make decisions about your healthcare, understanding your rights, and planning in advance can give you peace of mind. Go to: compassionindying.org.uk

Seamus O’Mahony – author of The Way We Die Now.

·      The concept of the ‘good death’ sanitizes something messy

·      Palliative care was sometimes trying to bludgeon people into ‘acceptance’.

·      Death is not something you can prescribe, sanitise or workshop

·      Death used to be tamed by religion and ritual. We have replaced the r and r with a new illusion which can ‘tame death’

·      Human agency has replaced the power of nature.

·      Rethinking dependency – not such a terrible thing, maybe?

·      Turn oncologists into the amicus mortis

·      What demedicatisation would mean for healthcare workers

These are just my inaccurate notes and paraphrases, caught on the hoof. Look out for the findings of The Lancet’s commission on The Value of Death in coming months. 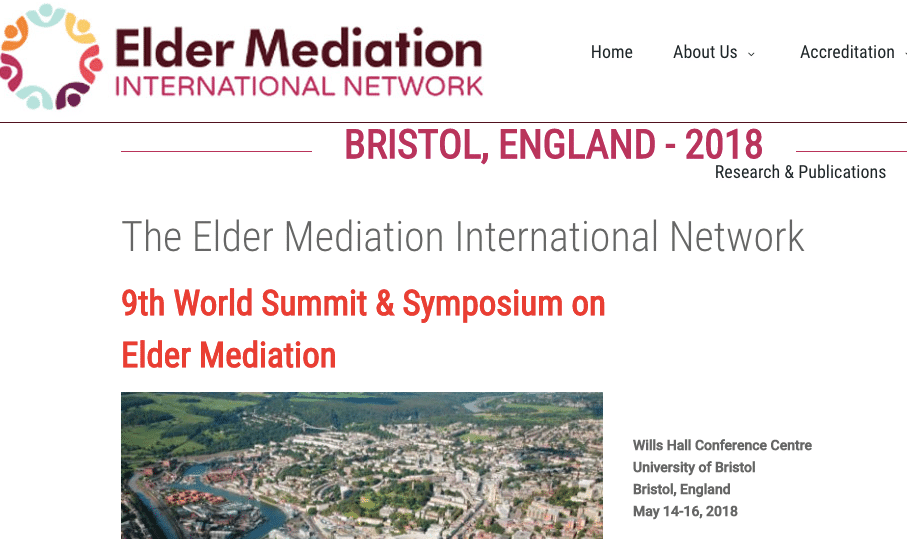 8th May 2018 Elder Mediation World Summit 2018, Bristol, 14-16 May – Invitation Read More
We use cookies to ensure that we give you the best experience on our website. If you continue to use this site we will assume that you are happy with it.Okay